The Nurses Station, PC
A Scientific Explanation For Why There Are So Many IV, Blood Draw, Injection of Contrast And Blood Donation Failures

Abstract    In 2008, there were 37.5 million hospital admissions in the United States. Every hospital patient gets at least one blood draw on admission, 7 out of 10 get an IV, and 3 out of 10 get an injection of contrast totaling a minimum of 263 million vein access procedures in hospitals alone.  At least 4 out of every 10 sticks fail, and not just once.   That calculates out to an estimated 174 million vein access failures divided between the IV, the blood draw, and the injection of contrast.  Why so many failures?  The primary explanation is that the current methods of vein access are not science based; they are anecdotally and empirically based and rooted in the 19th century.

According to history, two thousand or more years ago bloodletting began, the first form of vein access. And in the 5th-19th centuries, when it was most popular, that primitive form of vein access involved the use of a scalpel and a tourniquet and other primitive devices.(1,2) Was the tourniquet used to promote venous distention, to bleed more; was it used to prevent the venous blood flow from going up, so more would go out (the ‘damming’ effect’): or was it used because they feared that bleeding to death could actually occur and the tourniquet was used in its truest sense – to stop bleeding? Only vague written descriptions of the practice exist and only a general description of the thought process behind the practice can be found.  But considering the absence of scientific information about the body at that time, using the tourniquet to prevent bleeding to death is the logical answer.

But what we do know for sure is that 2000 years ago, when vein access began, the medical community did not have the knowledge about anatomy and physiology, or the tool technology that we have now.  We also know that in the 5th -19th centuries it was primarily a barber who did blood letting.  Barbers were not scientists, nor were they science educated.  So the foundation for vein access, laid in those days, was not based upon science.

And , in spite of the advances in the tools that have been made over the last 200 years, like the hypodermic needle and its use to enter a vein, and the vacutainer system in 1949 that sucks blood into the tube for diagnostic blood draws, and other advances in tool technology, the actual procedure of  locating and accessing the vein has not changed (much);  they still smack, slap, flick and tap the vein and they still use the tourniquet.

The vein  access procedure of today was built on that 5th-19th century non-scientific foundation.  And that is why there are so many vein access failures.

This article will describe and debunk just a few of the well established anecdotal and empirical practices of this old procedure.  There are too many to identify all of them here.


As mentioned in the opening statement, in 2008, in the U.S. hospitals alone, there were over 174 million vein access failures, and that doesn’t even begin to describe all of the collateral damage and affected medical outcomes associated with these failures. But how did we arrive at that failure number?

Calculations used to arrive at this number, were based upon these factors:

The following estimated numbers for these vein access procedures was based upon a  5.5 average hospital LOS and typical ordering frequency of these procedures.

Three out of every 10 patients get an injection of contrast for an x-ray procedure on admission and one more during that 5.5 day LOS.
37 million x 0.33 x 2 = 24 million injections of contrast

The industry acknowledges a failure rate experience of 30-40% with vein access procedures in the three disciplines; nursing, laboratory medicine and radiology.
With a 40% failure rate for each stick, and an industry accepted limit of up to 6 sticks per procedure, if need be, these are the numbers:

One doctor along the way tried to address this vein access issue.  Dr. Erwin L Burke wrote an editorial for the NEJM in the June 4, 1970 issue, pg. 1336-1327, called Care and Feeding of Veins, where he described the plight of ‘…physicians and paramedical people who experience the necessity of multiple punctures to begin an infusion or to obtain blood samples…..’.(5)   Dr. Burke was on the right track, recognizing the problem of vein access failure.  And he was headed in the right direction when focusing on vein dilatation. But there are several points of failure and contention with vein access besides what he focused on. 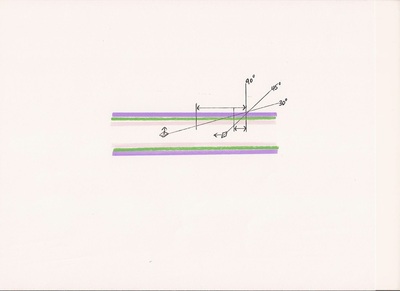 Let’s consider just a few here.  This will clearly demonstrate the ‘missing’ science in the current vein access procedures and clearly demonstrate the impact that this has on the procedure.  This information cannot be found in any of the current training programs or in any written descriptions in books or teaching manuals on the skill of vein access for blood draws, IVs or injection of contrast, except one.

#1  Gray’s Anatomy tells us that the vein wall is innervated AND has a middle layer of smooth muscle.(6)  Guyton’s Physiology tells us that negative stimuli
to the nerve tells that muscle to contract.(7)

#2  A natural dilatation, with heat or gentle touch, of the adult vein results in an average 2 mm diameter dilatation of that vein.  Article:  Van Bemmelen, Kelly
and Biebea, Journal of Vascular Surgery, Volume 42, Issue 5, Pg. 957-962 (November 2005),  Improvement in the visualization of superficial arm veins
being evaluated  for access and bypass.8  This study used heat to achieve a neuromuscular dilatation – oddly enough, the same method that Dr. Burke used
in his.

An artificial dilatation, from applying a tight tourniquet, causes an over distention of that vein greater than 2 mm. To our knowledge, no studies have been done to
document the average size of distention with a tight tourniquet,  but palpation alone will clearly demonstrate the size of the vein over distention with the use
of the tourniquet compared to the naturally dilated vein with the new palpation technique by Vein Access Technologies (without the use of the tourniquet).

PROBLEM:  There is an anatomical limit to how much the vein wall’ nerves and smooth muscle can be stretched before injury occurs to those tissues and  that
segment of vein wall.  (injury i.e. varicosity, infiltration, vein rupture).

How did this happen and how does it continue to happen?  Let’s turn to the profession’s frequently employed use of the term ‘evidence-based’ for an explanation, because

when the industry is approached today with any new information they immediately want to know “Is this information ‘evidence based?”,  holding up that vernacular as if it were a shield protecting their old method and defending against the invasion of the new.

The definition of “evidence based” states that the evidence be based upon a ‘scientific method’ before it can be applied to clinical decision making.9 The foundation, then, of  Evidence-based medicine (EBM) or Evidence-based practice (EBP) is science. The evidentiary clinical outcome of that science applied to the clinical practice is the second part of the process.  It’s a combination of science and evidence.  But science is the foundation. And the original and current methods of vein access are not science based (and their evidence demonstrates a 40% failure rate).

The term Evidence-based treatment (EBT) or empirically-supported treatment (EST)9 more accurately describes how the current vein access got started and why it continues to this day. Recall the beginning of this article. Phlebotomy, the first form of vein access, is 2000 years old and the originators of the current ‘tourniquet technique’ vein access were the 5th-19th century barbers.

….Many areas of professional practice, such as medicine…., have had periods in their pasts where practice was based on loose bodies of knowledge.
Some of the knowledge was simply lore that drew upon the experiences of generations of practitioners, and  much of it had no truly scientific evidence on
which to justify various practices……  Wikipedia (9)

It is this author’s opinion that the vein access procedure of today is one of those ‘loose bodies of knowledge’; it is based upon anecdotal and empirical experience, not science.

The current vein access techniques may be old and well established (meeting some of that criteria for ‘evidence-based’), and ingrained in the brains of millions of people around the world, and written in hundreds, if not thousands, of books, but the evidence of millions of vein access failures warrants investigation.

1.  The History of Phlebotomy, http://www.mtn.org/quack/devices/phlebo.htm.

9.  Wikipedia, definition of ‘evidence based’.